May 28, 2020, 15:51 PM
Curt Boatman feels most at home in the skies. A commercial airline pilot, his career has taken him all over the world experiencing new cultures and adventures. But his career could have been cut short earlier this year when Curt was diagnosed with sleep apnea.
Title : Curt's Story- Sleep Apnea
Author Name :
Link Url :
Link Text : Read More
Hide Quotation Marks : Yes

Curt Boatman feels most at home in the skies. A commercial airline pilot, his career has taken him all over the world experiencing new cultures and adventures. But his career could have been cut short earlier this year when Curt was diagnosed with sleep apnea.

Sleep apnea is a condition in which people experience multiple episodes of apnea (stoppage of breathing repeatedly, usually for at least 10 seconds) during sleep, which disturbs the sleep-wake cycle. If left untreated, the condition can increase the risk of moderate to severe conditions, from high blood pressure to heart attack.

Curt had been experiencing symptoms, including chest pains. He made an appointment with Dr. Casey Benton at Virginia Heart and was immediately scheduled for a sleep study.

“I was diagnosed with moderate to severe sleep apnea. For me, this could derail my career if it wasn’t dealt with quickly and effectively. This was my livelihood.”

Two weeks later, Curt met with Hannah Moon, a sleep nurse practitioner, to review the results and set a course for treatment. During the appointment, Curt’s aeromedical advocates called, a group assigned to ensure compliance with FAA policies.

“I asked her if I could patch them into the conversation and she agreed. Everyone was on the same page and though I was initially grounded for 14 days, Hannah immediately knew what I needed and got to work.”

Everyone felt the sense of urgency.

“Normally, it’s two weeks after the initial consultation to discuss your results before you even get another study. We started the next day. Two weeks later, we started the course of treatment with the CPAP (Continuous Positive Airway Pressure) device. They worked with me to get a six-week treatment scheduled into 3 weeks.”

With the strict FAA compliance standards, the team at the Sleep Center rallied around Curt to work toward a common goal – getting him back in the air.

“It was so detailed — checking off lists, additional paperwork, letters, certifications. Everything had to be exact. You can’t make a mistake — just one word can change the course of a career.”

Even the size of the CPAP became a team exercise. “It was too big for my lifestyle. I needed something I could put in a travel bag. We found a smaller version that had the same functions. It was a game changer for me.”

The treatment has been a success, not only giving him restful sleep, but a quality of life he never knew was missing. But more than that, Curt said he appreciates the way the Virginia Heart team went the extra mile.

“They literally adjusted the normal schedule of treatment just for me because they had the same sense of urgency I did. They cared about my unique situation, and also spent time walking me through every step. It really was a team. It was personal to them.” 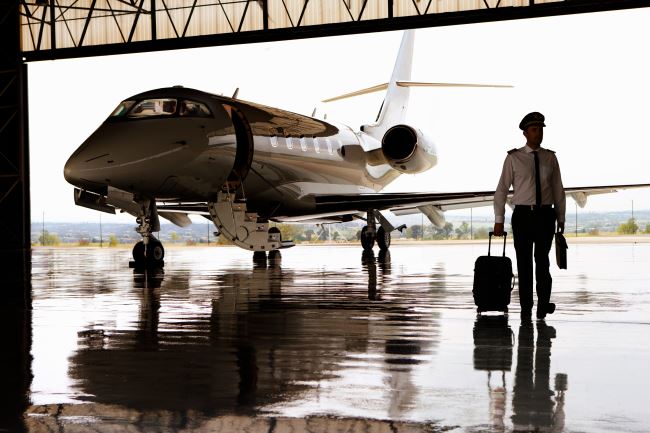